*This canyon is located on Navajo Indian Reservation and a permit from the Navajo Nation Parks & Rec was required.

Thursday, two days before the trip, and I was still awake at 3am. I usually laid awake those days because my 3 month old son would be fussing, but that late night was due to the haunting thought of a 390ft rappel off the side of a massive red rock cliff. Rappelling lower waterholes canyon had been a dream of mine ever since I learned of its existence back in 2013. It is marked as a 4BIVR/X- on the canyon rankings making it the most dangerous canyon I have done to date. Note: Please do not attempt this canyon without proper gear and advanced canyoneering experience.

On Friday, July 20th, me and my good friend Nate Breedlove jumped in my little beater and made the 5 hour drive towards Page, Arizona. The plan was meet up with the third and final member of our crew, David Tobler, camp, then take Saturday and Sunday to complete the canyon. Apart from the technicality of Waterholes, what really makes it special is how you finish. The canyon empties out at the Colorado river, leaving you no choice but float down 4 miles to the nearest dock, Lee’s Ferry. Luckily for us, a local Utah outdoor company Klymit volunteered to sponsor the trip providing us with dry bags and light weight rafts that would be small enough to fit in our packs, and big enough to carry us down the river.

So our plan was camp Friday night, tackle the canyon Saturday, camp at the river, then float down Sunday morning. Well, that was the plan, but Tobler was late driving up from Phoenix, putting a delay on our plans so we had to make some adjustments.

We staged a car at Lee’s Ferry but by the time we were done it was too late to go camp so we did the next most logical thing… get some Taco Bell and brainstorm! After talking we decided it would be most epic if we went into the canyon that same night and camp in the slots. This way, we would have a head start in the morning. The only problem, we would have to hitch hike from Page to the trail head, which surprisingly didn’t take long at all 😅

Once at the trail head we had to find our way into the canyon with only our head lamps. This was my first time canyoneering at night and it seemed like even the smallest obstacles took extra time to get through. It had rained earlier on in the week so even towards the beginning  we were already coming across pools of water that, with some extra effort, we were able to bypass. After going less then a mile in nearly two hours, the canyon opened up enough to find a flat surface where we were able to lay out our pads and get some rest for the night. 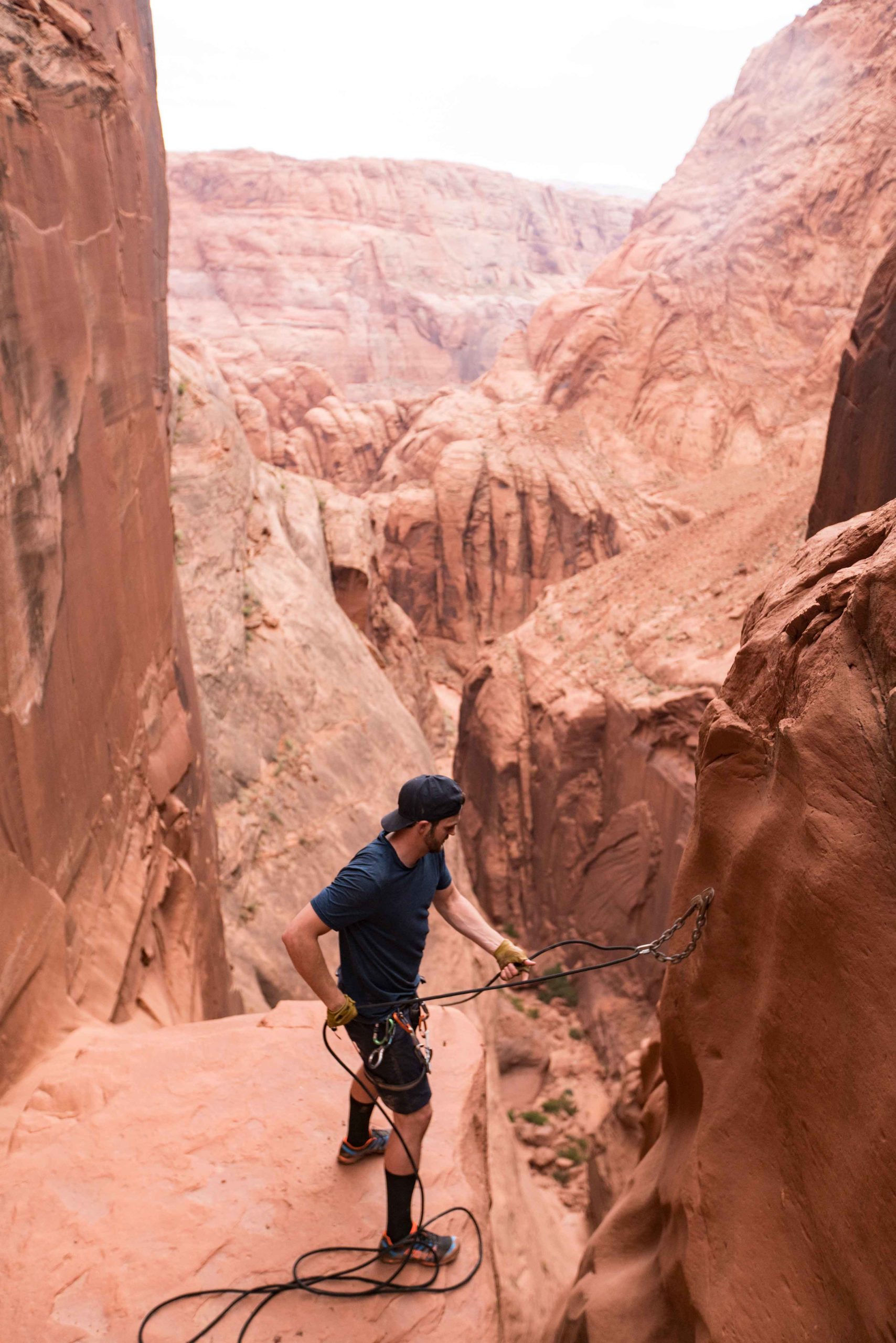 By the time the sun had crept into the canyon we were up and ready to go. It was around 8am when we starting going and there were about 13 rappels ahead of us, according the blogs I had read beforehand. We knocked out our first rappel the night before and our second was close ahead. Note: Rappels 25ft or shorter can be done with webbing so that you are not always having to use your rope. The canyon was relentless. It’s slots were extremely narrow and required many downclimbs and swims through deep stagnant water. If I were to ever do this canyon again, I would definitely wear pants, long sleeves, and knee/elbow guards. The sand paper walls will tear through anything, even your gear. After about five hours of  squeezing though cracks and rappeling multiple drops, we began to approach what we believed to be the end of the world.

According to the blog post I read, the Edge of the World consists of the 8th and 9th rappels. The first is 90ft and drops to a ledge which is 300ft. Now either my math is wrong or I found an extra rappel, but the 8th rappel was NOT the start of the EOTW. It was the 9th and 10th. The 8th rappel was an 80ft drop that landed in a large area right before the 9th rappel. The 8th is a beautiful drop, probably one of my favorite from the trip. Once all 3 of us had made it down we made the final approach to the biggest drop of my life.

The sky ahead of us was full of thick dark clouds and we could hear thunder echo throughout the canyon. The last thing you want while canyoneering is rain, and that seemed inevitable. The second to last thing you want is a bob cat tracking your trail, and we could hear that stalking us on the cliffs above. The anxiety of the big drop was shaking our nerves and, while standing on the top ledge, it started to down pour on us. After about 10min the rain let up. There were more clouds on the horizon and the bob cat was still looming on the cliffs above. We got our rope out and started to set up the 90ft drop into a crack only 3ft wide. It was then that we thought we were moving forward when I dropped one of my carabiners into the crack. I only had two extra carabiners to begin with and needed both of them to make it down the big drop. Our only hope was that the carabiner fell into the crack but was able to stop at the ledge above the final 300ft drop. We said a prayer, then sent Nate down to look for the carabiner and set up the big rappel. To our amazement, he found the carabiner! But after he took a look at the next drop he called me down and said he couldn’t do it. The anchor for the big rappel was hanging 15ft below the cliff and the only way to reach it was by lowering yourself down and setting up the 300ft rope while free hanging then, in that same spot, transitioning over from one rope to the other all while still hanging. Nate took a look and psyched himself out. It would have to me to rig the rope. Long story short, there were a lot errors made while setting up the rope and ontop of that it fell into what is know as the “rope eating crack” and I had to free it from that as well.  I was hanging off the cliff for 30min before I was able to start lowering myself down. My arms were shaking and my harness was cutting into my side by the time I reached the ground. I unhooked my self from the rope, starred up and yelled, “I did it!!!!” The others were not far behind me. We all made it down.

After we got the rope down we took a breather then started out again. Note: We used paracord as our pull cord which worked perfectly and saves alot of money. Our next rappel dropped us ontop of a rattle snake that we were carefully able to avoid then we only had one more 60ft drop and we were finished with the rappels!

The final walk out took approximately 45min. The canyon snaked along with towering walls on either side. It was then that we did our canyon tradition- sing the national anthem at the top of our lungs. After awhile it became obvious that we were nearing the colorado river due to the sudden uprise of vegetation along our path. Once we turned the final corner and the river was in sight, me and Tobler drop our bags and headed straight into the clear, ice cold water. I personally had ran out of water over an hour ago so I jumped in mouth wide open! Once we were all hydrated and relaxed we had to make a decision. Camp that night on the banks of the colorado river or blow up the rafts and try to make it down the river before sundown. At this point we were all exhausted and had already spent one night in the canyon so we geared up and set off floating down the river. The water was ice cold but our Klymit Litewater Dinghys kept us dry…. until it starting raining. About a mile into our float it started to drizzle on us, but didn’t last long. Our main concern was the sun. It had already set in the canyon, light in the sky was fading fast, and the temperature was dropping dramatically. The current of the river drug us along until finally, after about 2 hours, we reached the dock at Lee’s Ferry. We had made it. Pulling myself out of the water I felt a rush of relief come over me, and I am sure Tobler and Nate felt the same. We had conquered the canyon. We made it.

Below is a photo gallery from our trip. Also, if after reading this blog you decide you want to tackle waterholes canyon, remember, this is an extremely high ranking venture. DO NOT attempt without knowing proper canyoneering and escaping techniques. Enjoy 🙂

Sorry, the comment form is closed at this time.